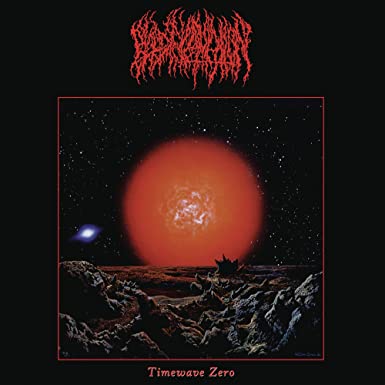 About a year ago I heard Blood Incantation for the first time. A good friend of mine showed me Hidden Histories of the Human Race and I fell in love with it. That album went places and moved me in ways that Death Metal normally doesn’t. The soundscapes, the melodies and the weirdness all combine to make it a masterpiece.

This album came out of nowhere for me. I’ve been generally out of touch with music on social media until about a month ago and randomly discovered it while checking out another band. I was grabbed immediately by the gorgeous cover art and bought it right away. I have never been so unprepared for an album in my entire life.

Instead of a brutal, weird, beautiful death metal album I was met with 40 minutes of music that sounds like the score to a Science Fiction survival horror game that never came out. This album makes you feel like you’re out amongst the stars in a Lovecratian nightmare. It’s ethereal, haunting, desolate, horrible and unspeakably dread-inducing all at the same time.

The album is broken into two pieces with four movements each. IO and EA. Both pieces run roughly 20 minutes each.

There are no vocals, there is barely any guitar (The third movement on each piece features beautiful acoustic guitar playing) and there are no drums. I respect that a band lauded for their virtuosity and creativity in the Death Metal world went out and made this album. It takes an incredible level of confidence and creativity to do something like this and I’m happy that Timewave Zero exists.

It’s only July but at this point, I’ve got this as my album of the year. I just can’t see anything surpassing this. I also bought a shirt featuring the album cover because again, it’s gorgeous.

I highly recommend this album. It’s a must listen. Go in with an open mind. Turn the lights down low, put on your favourite headphones and enter the world of Timewave Zero. You won’t regret it.